There are numerous documents that prove, since earlier times, the existence of burial places and private chapels in the Church of San Pablo. In the Main Chapel the Sotomayor family was buried, but, since they could not afford to maintain such a privileged and expensive place, they erected another chapel, currently known as Chapel of Souls. In the apse of the Gospel, today Chapel of Anguish, the Argote family were buried, masters of Cabriñana. On the other hand, the Angulo family owned the Chapel of Santo Domingo, which is thought to have had the apse of the Epistle. A document locates the Chapel of the Hoces from 1484, but its exact location is unknown, although it is believed it could have occupied the space where the Chapel of Expiry is today. At the foot of the nave of the Gospel there was the Chapel of San Jacinto, which belonged to the Mesa and Figueroa family, as can be seen from the crests on the entrance arch. It was founded in 1446, and a few years later, in 1483, works were carried out in the chapel “which must be demolished and turned into a different one“.

The first chapel we are going to analyze was commissioned to be built in 1409 by Lady Leonor López from Córdoba, in memory of her father, Martín López, who was sentenced for supporting Pedro I in his fights against his bastard brother Enrique, who later became King Enrique II of Castilla. The Dominicans gave Lady Leonor the space where the door of the Gospel was, and the privilege to place the door wherever she pleased, which was its current location, that is, at the foot of the church. The chapel, which since the 18th century has been Chapel of Our Lady of Rosary, can be accessed through a slightly pointed and elevated arch, supported by rows of small plain-shafted columns, whose capitals are mixed with the continuous frieze decorated with vegetable motifs. The arch is finished by a restrained alfiz, and over it there is one of the rose windows which provide the room with light. Once inside we can see a place with an octagonal floor, which was covered by Pedro López at the end of the 15th century with a spectacular starred vault with straight ribs. We can highlight the image of “Our Lady of Rosary“, from the 18th century, when the remodelling of the chapel took place, and while the Niche was also built, a room conceived for the image. The Niche has a totally different style, according to the taste of the 18th century. It has a circular floor, and the semi-dome is supported by pairs of columns on big plinths. Over the columns we can see sculptures of angels holding Christian symbols and, between the ribs of the vault, there are tondos with stained-glass windows representing different saints.

In the middle of the nave of the Gospel, there is the Chapel of San José, founded at the beginning of the 15th century by Lady Inés Martínez from Pontevedra, who sponsored some works in the church. The inside can be accessed through a restrained pointed arch, where we can see a square space covered by an eight-section cantilevered vault with semi groin vaults, a kind of ceiling very frequently used in the Mudejar style of Seville. The altarpiece, which fits perfectly with the arrangement of two of the semi-domes, was made at the beginning of the 18th century by Jorge Mexia, using gilded wood. It consists of three vertical sections plus two more sections, where we can highlight the use of the estipite and the Solomon column. In the central alcove there is the main image of the chapel, “San José“, represented next to Baby Jesus and holding a branch of iris, his most characteristic attribute.

If you are wondering what to do in Córdoba, we recommend you visit the Fernandine Churches hiring one of our guided tours. We will explain there a special chapter dedicated to the Church of San Pablo. Choose to do high quality sightseeing with qualified staff. Do not hesitate, ArtenCórdoba is the best option. 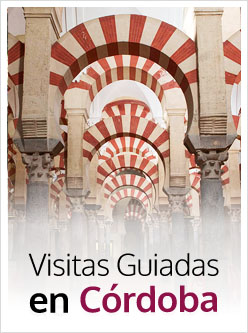