Of all the monuments preserved in our city, it is probably the Synagogue of Córdoba the one with the lowest dissemination. However, in this section we will try to prove that it is a very important building, from an artistic, historical, social and political point of view.It is the only example of these characteristics preserved in Andalusia up to our days, with outstanding inscriptions which place the building at the vanguard of this type of constructions in our country.

There are numerous historical moments of which the Synagogue of Córdoba has been a distinguished witness, such as the expulsion of the Jews, which had a great influence in the buidling becoming a hospital, more specifically a Rabies Hospital. It later became a chapel, where the shoemakers of the city had their guild. It was finally used as a preschool until a series of inscriptions were found in 1884, which led to a thorough process of restoration.

These inscriptions were studied by the academic Rafael Romero Barros, father of the famous painter from Córdoba Julio Romero de Torres. A year later, in 1885, the Synagogue of Córdoba was declared National Monument. At that time the building belonged to the Church, and the Bishop donated it to the State, although it was not until 1981 when it was registered as such by Manuel Nieto Cumplido, current archivist of the Mosque-Cathedral, and at the time, Cultural Representative of the Province, who registered the building as property of the State in 1981.

Nowadays, probably due to its location in the Jewish quarter, and therefore, next to the most important monuments in the city, the Synagogue of Córdoba is one of the most visited places by tourists. Besides, this building, along with the Mosque or the Alcázar of the Christian Monarchs, shows the cultural diversity of our city, a clear example of the coexistence among the different civilizations that have lived in Córdoba.

Next, we have prepared a brief analysis about the stay of the Jews in our city, dedicating another special chapter to the Synagogue, their temple. Later, we will carry out a small research of the building paying special attention to its stylistic features. Next, we will comment the different inscriptions found in the complex and, finally, we will show a photo gallery with the aim of completing the information as best as possible.

If you wish to know the Synagogue of Córdoba do not hesitate to hire one of our guided tours. We are experts in the interpretation of the historical heritage from Córdoba. If you have chosen to do sightseeing in Córdoba, choose a high quality option, choose ArtenCórdoba. 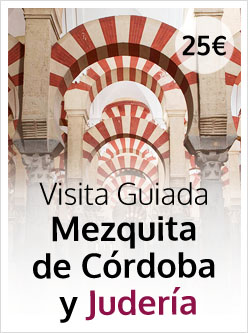